FY welcomed the in-room and remote participants to the face-to-face meeting
a) ASO AC Teleconference Attendance
FY brought to the attention of the members the attendance at the teleconferences; noting that not reaching quorum is very inconvenient for the other members.
She also noted the importance of responding to the RSVP, which is sent 7 days earlier.
FY asked about time convenience, and if that is the issue, then it must be brought up.
FA noted that the new fixed time has affected her attendance; she suggested a calendar invite to the group. OO and FA will ensure they will attend, and ask GV ring her in case the network is down.
LL reiterated that regional participation is required.
BJ also asked that a calendar invite would assist.
NN thanked GV for the effort he put in; you can subscribe to the calendar as it is updated; agreed that the regional coordination is required; regarding the quorum, NN suggested that if there is no improvement to the attendance, we might need to adjust the quorum rules.
KB commented that working with others in the region is the minimum requirement. If the member cannot attend for whatever reason, they should let the group know. If the member cannot consistently attend, that should be examined.

FY went through the agenda. FY noted the 75 mins for the CCWG Accountability Stream 2 session.
There were no changes to the agenda.

February Minutes to be reviewed in the next teleconference.

Action Item 20170308-01: ASO AC to review the updated work plan in more detail by the F2F meeting, where FY will put out a call to adopt the plan.
2017 work plan action was adopted following LL’s latest additions.
Action Item 20170308-02: ASO AC to establish the policy proposal facilitators team appointment procedure.
The ASO AC established the Policy proposal facilitators team: TF; FA, JV, KB, and NN have volunteered (one from each region).
Action Item 20160803-05: JS and GV to work on conducting a ‘mock election’ with all the AC in participation.
GV reported that all ASO AC have casted their ballots; GV said that some time may be needed to examine the results to understand how the calculations are made (new methodology with preferential system)
GV suggested setting some time up during the day to examine the calculations.
NN agreed; and what the effect of each vote would have
KB commented that you need to understand who you voted for; but in this type of voting, complete random voting would probably not happen; he suggested having a topic that was not randomly voted, for example.
FY asked if there was a story that what happened; JS said he could walk you through the story; but used famous names instead of real ones to add some objectivity to it.
FY suggested to discuss this in the AOB or after the ICANN Board elections.
NN noted that the point is not who you vote for; but how the voting occurred.
FY suggested discussing this further.
ACTION CLOSED. Topic to be added to the agenda in AOB
Action Item 20160630-04: Chair to recommend to the NRO EC that Work Stream 2’s work be completed before ATRT3 begins, and share the EC’s response with the ASO AC.
FY noted that the Chair at this time was LL.
JC noted that the NRO EC will discuss it further on Thurs.
Action OPEN.
Action Item 20161012-06: FY to Prepare Discussion Points on Grey Areas of Responsibilities between the ASO AC and the NRO EC.
Topic to be discussed in today in agenda item.
Action Item 20170208-03: JC and NRO EC to review the issues of an editorial change to a global policy and whether such a change is within the scope of the global PDP.
JC said he would discuss the topic on Thursday NRO EC meeting.

GV went through the suggested meetings – these are contained in a shared Google calendar.
LL asked if the fellowship session is open for the AC to attend – currently AS is doing the presentation.
AS confirmed that the rest of the ASO can attend. 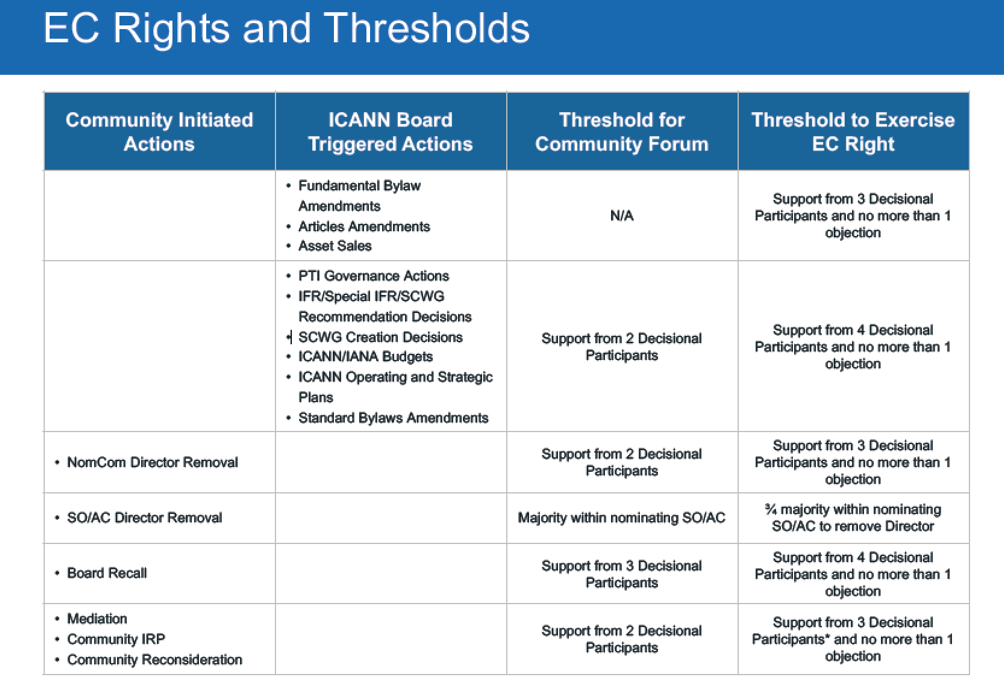 On this slide, there is more detail that JC clarified, for example – IANA functions request (IFR) or Separation Working Group (SSWG), if there is a restructure of the PTI. He noted that there are timelines that apply to each petition that the AC needs to be aware of.
KB asked what an individual meant?
FA confirmed that the trigger is an individual in a community – but that person must be attached to an AC or an SO.
JC said there is a paragraph in the new by-laws regarding the empowered community. “Each decisional participant shall adopt procedures for exercising the rights of each decisional participant…including:
• Who can support the petition to the decisional participant
• The process for individuals to submit petitions to the decisional participant, including whether the petition must be accompanied by a rationale
We are obligated for each power to identify who can submit a petition to us and what has to be in it and whether we can accept it or not, but we can easily say we don’t accept petitions, but we only accept it from ASO AC members. There’s nothing in the bylaws that requires us to accept a petition from anyone. We just need to have a process for whether to accept them or not.
BJ stated that the key here is to have a process.
NN clarified how we are discussing these; is the group going to discuss these individually or group them?
JC confirmed that the ASO AC will need a process for each of these seven (or 12). Looking at the matrix – there are potentially 36 petition types that require processes. For example, initiating a petition, a process for if the AC accept the petition etc. All these petition types have to be defined as to how the ASO will exercise these empowered community rights. What would be helpful is a list of what the ASO AC feels it will need to be involved in?
FY commented that there needs to be structure in the discussion. What needs to be discussed is what applies to the NRO EC and what applies to the ASO AC. This will help rectify some of the questions relating to the grey areas issues. FY suggests taking a holistic review of these empowered rights.
FA suggested that because there is already the challenge of the grey areas and who is responsible for what, a decision be made on each power as to who will be responsible; anything new that is not clear, requires further discussion on where it will go.
KB suggested having a third “Too-hard bucket” for those powers where the decision is too hard, for later discussion (the first two being the ASO AC bucket and the NRO EC bucket).
JS mentioned there should be a bucket for “not applicable to the ASO AC at all”.
NN suggested tackling the seven Empowered communities by discussing each topic and deciding on each as to whether they are relevant to ASO AC or NRO EC.
(Note, slide 12 of JC’s slides add more detail of the image below)
FA asked whether the AC should instead be working with slide 12 as it has more detail.
FY suggested directing the discussion on the slide below as it provides a high-level view of the powers as all we want to finalise in this session is what power belongs to whom. 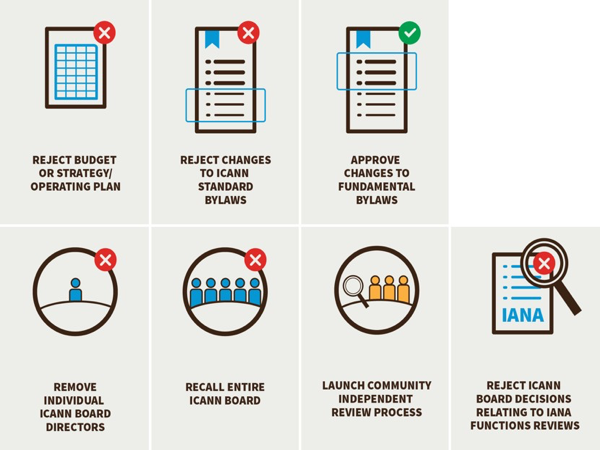 Larisa Gurnick (LG) and Sherwood Moore (SM) came in to outline the different review activities – organizational and by-laws review. [Slides]
Review topics – ASO; Security Stability and Resilience Review (SSR); Accountability and transparency (ATRT), Competition, Consumer Trust and Consumer Choice Review (CCT), Whois (RDAP).
The operating standards outline how the reviews will be conducted – they align with the ICANN Bylaws. There are several areas that are new so there are still processes being developed. So the operating standards will fill in the gaps.
LG noted there are various ways to participate.
[ICANN board members AM and RdS joined the meeting. LG and SM left]

Postponed to the next teleconference

FY proposed to move points 8 and 9 to the next teleconference. There were no objections.

JC reported that the changes of ASO AC operation procedures are under NRO EC review some made edits have been made and will get back to the AC soon.
FY said that EC and AC can coordinate better and streamline a bit on what panels, working groups, and review teams that ICANN invites us to participate in (relevance). In time, it will help us to manage workloads eventually.
KB agreed that there needs to be simplification of processes and procedures in this context. He suggested splitting into three teams and dispersing the work as an example.
JC clarified the work of the GAC public safety working group in response to a question of AS – they have had an update in the ARIN region – their concern are the contacts on address block might be incorrect, and the problem is that there needs to be a responsive contact to mitigate/address the abuse. It can cause them any days of delay and they are trying to get a more accurate whois on the edge.
PR said that it is important to note that the LEA community need to engage to the communities on the issues they have.

RdS said that comments are open on budget considerations; auction proceeds.
AM noted that he will be attending many of the RIR meetings and would love to do a joint session or meeting with the ASO AC and NRO EC.
RdS recognised CR work on his summaries on what’s happening with the ASO AC.

a) Update on Consumer Choice and Trust Review CCT.

Jordyn Buchanan (JB) and Lauren Capin (LC) shared an update on the CCT review.
High-level conclusions, positive indictors; improvement in competition, consumer choice and adoption of safeguards. Data collection needed to identify any significant negative consequences. It’s an open comment period.
JC said there is an increase in competition; a lot of things are hovering around the middle; more data would be helpful.
The CCT have made 50 recommendations; with prerequisites and in high; medium; and low priority
KB asked how this relates to the numbers community?
There is enough of a play between domain and numbers that it will be beneficial to review.
JB said this is focused on consumer issues.
FY noted that we can always spare this time to hear from updates on these topics to give us more informed information to provide comment.

b) Any Pending Items for ICANN week

KB PPFT appointment – called a motion to affirm; seconded by LL. Motion carried; no objections.
TF; FA, JV, KB, and NN have volunteered (one from each region).
AB asked about clarification on the observers, RIR board members? Can they join in the teleconferences? Should we open this further?
FY said she would like to discuss this further in later meetings.
AM said that the perception exists that as the meeting is “closed”, it is questioned in the ICANN community.
FY said that for transparency reasons, we can have observers, as long as it is clear that it is an observer status.
KB said that perhaps there is a portion that we can keep closed and the rest open?
WW suggested starting a conversation on the list.